Skip to content
Home/News, Sedgefield Tak/Sedgefield took off into 2017
Previous Next

Sedgefield took off into 2017

Attending their first Cape Women’s Agricultural Association meeting for the year 2017, 47 of Sedgefield’s members arrived at the regular meeting venue. They walked into a busy hall with luggage standing round and an overwhelming ambiance of a noisy airport. Projected images and sound effects set the scene throughout the event. 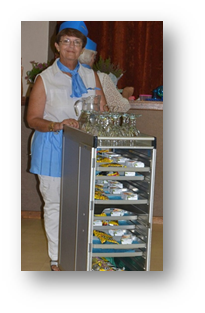 Refreshments served from the airline trolley.

Members/passengers were issued boarding passes for their voyage into the year 2017, destination: “your choice”. They boarded an imaginary plane where refreshments were served from an authentic airline trolley, by the hosting team, dressed up as flight attendants.  The cabin was well prepared with in-flight magazines and travel brochures in the seat pockets.

Schanel Oosthuizen and Zelda Klue from Pentravel, were responsible for the inflight entertainment. They introduced Vietnam as an exciting, popular, affordable holiday destination. Each member received a R500 gift voucher towards their next international holiday booking.

As the plane landed safely back in Sedgefield, a table laden with international cuisine awaited the disembarking passengers. Petite Baguette from France; Kuku-ya-Mashi from Lesotho; Apfelstrudel from  Germany; Pizza from Italy; Samoesas from India; Koeksisters from South Africa and Egiptiesekameelmelkroomtertjies from Egypt. 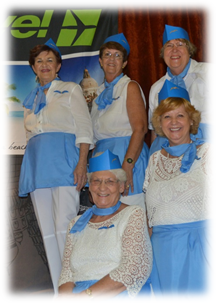 That’s the way to start the journey into the year 2017.